T-Blocks is related to the shape of the Tetris pieces (the computer game). A very common feature of the music I wrote during that time was the use of different and contrasted musical elements that repeated many times but every time they were presented in a different way and in different connections/contexts, similar as how the game Tetris works (a limited number of pieces that repeat in different ways and that the player has to move and adapt each time to a different context). The (t) in between T-Blocks relates to the time I wrote the first version of the piece, I wrote it in on a table tennis table. It's not so important, but I also liked the idea of table tennis related to the piece, again the idea of repetitions and adapting each time to a different context.

This idea of repetition/context is not only related to the musical material but also to a bigger idea of the whole piece being able to be played in different versions at the same time. So far I wrote 5 versions (A for amplified+prepared piccolo, B for prepared double/bass, C for prepared Bass trombone, D for 3 amplified electric typewriters+video and E for "multitemporal" percussion and video).

The video of version C was filmed with a 360º camera inside a triangular shaped room full of mirrors. The bass trombone is prepared with two different long hoses plugged into its two different valve tubes. One has a siren attached to its extreme and the other is connected with a 2 liters water bottle. 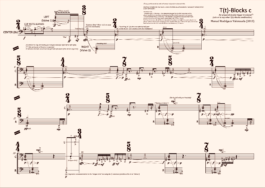