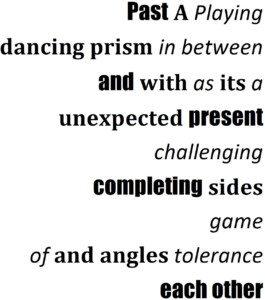 Following each font (in between the lines) the following sentences can be deciphered:

- Past and present completing each other

- A dancing prism with its unexpected sides and angles

- Playing in between as a challenging game of tolerance

These 3 phrases synthesize perfectly the idea of the work. On one hand, musical motives or gestures appear and disappear and complete themselves over time. On the other hand, the work as a whole can be seen as a kind of mobile prism in which each of its faces is a different musical gesture. By rotating and "dancing", this prism shows its faces or motives from different angles and perspectives, with different and unexpected brightness and nuances. Finally, my mission as a composer was to try to unite all these motives, a priori radically different, placing them in between each other in a kind of game of balances or "tolerances", trying to take advantage of these differences and imbalances to build a rich and colorful habitat.

The poem itself is, in fact, built very similarly as the work: 3 different motives (in this case typographical fonts) that appear and disappear and whose content is completed over time in a kind of perceptual game.

This orchestral work is an adaptation of an earlier work for piano solo. In all my piano pieces, I also work with the idea of intertextuality or reinterpretation of pieces of the past. They start and end always quoting a specific work, in this case they were the Bagatelles No. 10 and 11 of op.119 of Beethoven. The titles are always in the original language of the composer of the used quotation. "Ungebetenes Spiel" can be translated from German as "Unbidden game" or "unexpectedly playing".

It has been performed by the Lorraine National Orchestra, the Aarhus symphony orchestra, Barcelona Symphony Orchestra and the SWR Symphonieorchester Stuttgart. 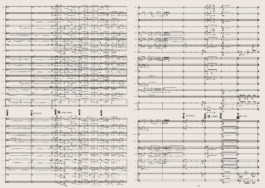